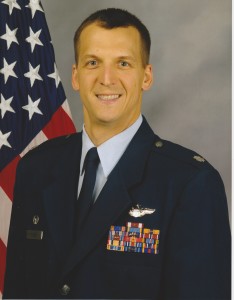 Following graduation from PHS in 1988, Christopher Cozzi attended the U.S. Air Force Academy where he was a Distinguished Graduate and was commissioned as a Second Lieutenant. In his almost 20-year military career, he as piloted KC-10 tankers and C-5 airlift aircraft and served on missions in over 10 major operations including Operation Iraqi Freedom and Operation Enduring Freedom. He commanded the 37th, later re-designated then 802nd Operations Support Squadron which included maintaining and operating Kelly airfield, Lackland Air Force Base, Texas. At the time the base was a key hub in evacuation efforts for Hurricanes Gustav and Ike and was named Air Force Air Education and Training Command’s Air Traffic Control Facility of the Year and Airfield Operations Facility of the Year in both 2008 and 2009. In addition to his outstanding military career, Chris and his wife Gina (PHS Class of 1989) are raising 5 children.